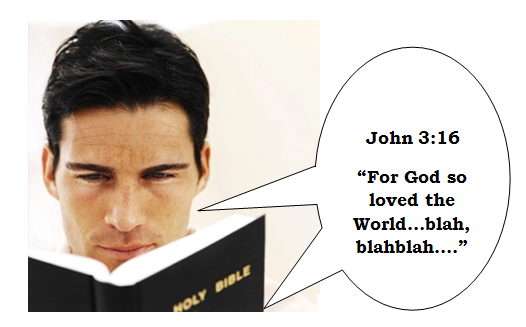 As I was brooding over this blog topic, an old TV show I watched as a kid flashed through my mind. I don't recall the title but if you are about my age, you probably watched it too when you were in your preteens. It was a show that featured a ventriloquist having conversations with his dummy cat. I thought the performance was ingenious; watching the ventriloquist cast his voice and make it sound like it came from the dummy cat. It was a very convincing performance for a child my age back then. It was only years later, when I read one of Alfred Hitcock's novels that I first learned of the term "ventriloquism" and of the art behind it.

Years later I drew wisdom from that childhood experience. I was once listened to a speaker and he talked about how we humans rarely  learn something new from life because we assume we have learned all that there is to know about a thing. We look at a bird or a flower and we say “bird” , “flower”. And assume there is nothing more to learn from them. So we miss out on greater revelations that may have been lurking beneath the surface; a deeper understanding of things that could revolutionize and transform our lives (and probably the world) if we were just open minded and curious enough to let nature teach us something new from that which we are already  think we know.

As I thought deeply on that teaching, I realized that in the speaker’s context, we often act as ventriloquists. We think nature is dumb and can’t speak to us so we speak on nature’s behalf, concluding that there can’t be more to learn from a thing or experience than we already known. So we look at things and all we hear is our own voice.

It dawned on me a few years ago that I was, surprisingly, a Christian ventriloquist. I’d read the Bible and instead of letting the Bible speak to me, I would conclude on what I thought the scriptures meant. And this is typical for most Christians. John 3:16 never means more than “ For God so loved the word….blah blah blah….everlasting life. Faith never means more than “.. the substance of things hoped for…blah blah blah…..things not seen”. We quote it parrot-like, not giving any more thought to it than we initially did.  No wonder we rarely get new revelations from the Word of God. If God has been offering new revelations from that Bible text and all we ever listened to is the voice in our head, we will definitely miss out on new understanding that could have unleashed fresh blessings in our lives.

When I stopped being a Christian ventriloquist, I began to receive empowering revelations from the Bible. I couldn’t have anticipated the depth of wisdom that I was seeing in the Proverbs, Hebrews 11 & 12, Genesis 1&2, Joshua, Ephesians , etc.  It’s been an amazing experience. I’ve been healed and blessed in ways I never thought possible. I would have missed out on all these if I hadn’t kept an open mind.

I got up about 4am to write this article because it’s been brewing in my heart for over a week. I had to share these words with you. It’s important that we realize that all great men acquired the habit of refusing to let stereotypes hinder them from learning something extraordinary from the ordinary, the uncommon from the mundane. After all, isn’t that what creativity is all about; the attitude of seeing or approaching things differently. In the same way, we must be willing to see and approach our faith and scriptures with a teachable spirit and desist from being the Christian Ventriloquist!

Thiago Silva Determined To Go Out On A High At PSG

Grief To Anger As Disaster-Hit Beirut Braces For Protests