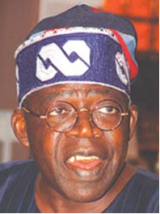 prominent Lagos indigenes to lent his support for the continuation of his predecessor, Governor Babatunde Fashola, in office, saying he has performed creditably well, contrary to the widespread rumours making the round that the former governor does not want Governor Fashola to run for a second term.
This came just as Governor Fashola stressed the need for the preservation of traditional institution, culture and values in the interest of the future generations.
Tinubu made the remarks yesterday at the official handing over of Oba’s palace, “Iga Idunganran”, Lagos Island as part of events to commemorate the 7th coronation anniversary of Oba of Lagos, Rilwan Akiolu I.
Among the dignitaries at the event were former military administrator of Lagos State, Brigadier Mobolaji Johnson; the Awujale of Ijebuland, Oba Sikiru Adetona; Oba Olateru Olagbegi, Olowo of Owo; Oba Ojora of Lagos; Alara of Ilara; former Attorney-General of the Federation and Minister of Justice, Prince Bola Ajibola; Alhaji Femi Okunnu; Senator Ganiyu Solomon and representative of Alake of Egba land, Alhaji Lateef Adegbite.
Tinubu made the declaration which elicited applause from the dignitaries and other guests at the occasion.
Commending Fashola for achieving the dream of building a befitting and modern palace for the Oba of Lagos, Tinubu described the incumbent governor as an achiever and a performing governor that deserved everyone’s support and cooperation in taking Lagos to higher heights.
The immediate past governor noted that the realisation of the new Oba’s palace was an evidence of Fashola’s dedication to duties and beliefe in shared vision of the past governors who had in one way or the other contributed to the upliftment of the palace into a modern building,
He said when the current democracy started in 1999, Lagos was in total bankruptcy but due to endurance of all, “Lagos has become what it is today and it will only get better with the type of Fashola in administartion.”
Okunnu, Oba Adetona, Olagbegi all spoke glowingly of Fashola’s administration and for making the building a reality in their own life time.
Fashola acknowledges Tinubu’s efforts
The governor in his brief comments, acknowledged the efforts and support of his predecessor Tinubu, who he said initiated the move to build the new palace.
“What we are here to commemorate is the dream that has been for long as successive military administrators and governors have contributed in no small means to the palace renewal with Tinubu administration being most impactful.Also, it was not just a government project but a project pursued with passion by Oba Akiolu.”
While stressing that everyone has a role to play in preserving their heritage, Fashola disclosed plans by his administration to bring in experts to work out ways of fully preserving the history of Lagos State.
“We will continue to ensure the renewal of Oba’s and chiefs’ palaces in the state. Already, some palaces are at different stages of completion. I feel humbled and delighted to have contributed in one way or the other to the preservation of our traditional institution,” Fashola said.

Comment by Olusegun Adewale Fadipe on May 25, 2010 at 11:10am
This a very interesting development. Asiwaju Tinubu has shown the rare quality and genre with which good leaders are made of. A good leader must not build a good successor and come back to destroy him. I believe now that Lagos is moving mountains! And Gov. Fashola also should be commended for not been a ingrate. He's a new Nigeria President in the horizon. More elbow grease, Mr. Governor. Eko o ni baje o!