MONTPELIER, Vt. – Vermont on Tuesday became the fourth state to legalize gay marriage — and the first to do so with a legislature's vote.
The House recorded a dramatic 100-49 vote — the minimum needed — to override Gov. Jim Douglas' veto. Its vote followed a much easier override vote in the Senate, which rebuffed the Republican governor with a vote of 23-5.
Vermont was the first state to legalize civil unions for same-sex couples and joins Connecticut, Massachusetts and Iowa in giving gays the right to marry. Their approval of gay marriage came from the courts.
Tuesday morning's legislative action came less than a day after Douglas issued a veto message saying the bill would not improve the lot of gay and lesbian couples because it still would not provide them rights under federal and other states' laws.
House Speaker Shap Smith's announcement of the vote brought an outburst of jubilation from some of the hundreds packed into the gallery and the lobby outside the House chamber, despite the speaker's admonishment against such displays.
Among the celebrants in the lobby were former Rep. Robert Dostis, D-Waterbury, and his longtime partner, Chuck Kletecka. Dostis recalled efforts to expand gay rights dating to an anti-discrimination law passed in 1992.
"It's been a very long battle. It's been almost 20 years to get to this point," Dostis said. "I think finally, most people in Vermont understand that we're a couple like any other couple. We're as good and as bad as any other group of people. And now I think we have a chance to prove ourselves here on forward that we're good members of our community."
Dostis said he and Kletecka will celebrate their 25th year together in September.
"Is that a proposal?" Kletecka asked.
"Yeah," Dostis replied. "Twenty-five years together, I think it's time we finally got married."
Craig Bensen, a gay marriage opponent who had lobbied unsuccessfully for a nonbinding referendum on the question, said he was disappointed but believed gay marriage opponents were outspent by supporters by a 20-1 margin.
"The other side had a highly funded, extremely well-oiled machine with all the political leadership except the governor pushing to make this happen," he said. "The fact that it came down to this tight a vote is really astounding."
Also in the crowd was Michael Feiner, a farmer from Roxbury and gay marriage supporter, who took a break from collecting sap for maple syrup-making to come to the Statehouse.
"I'm taking a break to come and basically make sure that I was here to witness history," he said.
The House had initially passed the bill last week with a 95-52 vote. 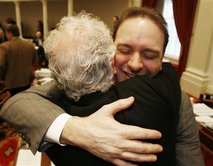 Delete updated their profile
6 hours ago