Nigerian President, Umaru Yar’Adua, is returning to Saudi Arabia, the second time in about two months, sources at the presidency said on Monday. Consequently, he might not be present at this year’s United Nations General Assembly, which is currently on in New York, where more than 150 world leaders will be in attendance. 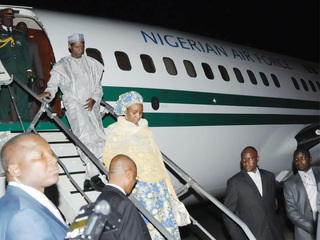 Again, Nigeria might just miss out on another opportunity to lobby for a permanent seat at the UN. African leaders are also expected to meet with the president of the United States, Barack Obama, to discuss issues of concern to Africa and the US.

The president, who had earlier planned to attend the Assembly with some of the ministers, has scaled back on his plan even though he was offered a slot to address the international forum. As of Monday evening, no one knew if the Minister of External Affairs, Ojo Maduekwe, will still attend the event.

Mr. Yar’Adua was in the Arab country last month for a three-week break, during which he attended the lesser Hajj and also saw doctors in the country for medical examination. The trip was announced ahead, although presidency officials have refused to state what is wrong with the president and what kind of medical treatment he is receiving in Saudi Arabia.

The UN Assembly will, on Tuesday, start a session to salvage the climate, and on Wednesday, after the grand opening, the debates will begin, with the agenda of the international body ranging from Middle East Peace to Terrorism and Global Poverty. We gathered that instead of planning a trip to New York, aides of Mr. Yar’Adua were actually focused on a trip to Saudi Arabia, where one of them said he might have to attend to unfinished business.

Sources in the presidency said the president had planned to attend the grand opening of the Assembly on Wednesday; but as things stand, no further plans have been made for the trip to New York.

Comment by Moses K Tawose on September 23, 2009 at 2:57pm
Things might be as easy as it looks because there might be more to it than what're disclosed to the public. Let's be aware that our president is sick and he got his medical check ups in Saudi Arabia because he trusted them more than the Germans where he was first getting his treatment. His going to Saudi Arabia might part business and part medical moreover don't let's expect full disclosure of his itinerary for security reason.
Also let's be aware that America has spite Nigeria especially with recent development that put Nigeria in a corner where questions would be raised and he would have no recourse to respond. This also would be embarrassing to our nation. We have to look at things in totality before jumping the gun so for now it's a saving grace for Nigeria.

Delete updated their profile
5 hours ago