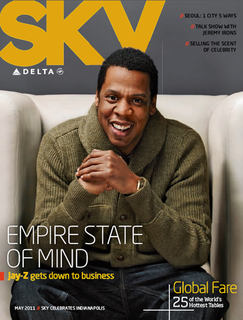 “It may sound a little arrogant, but I just think people can’t handle when somebody is successful. Something has gotta be wrong; you gotta be down with some higher power. And I guess when someone else is successful, it makes you feel like maybe you’re a failure. So it can’t be you, it has to be some other force.”

On working with Kanye:

“’Ye is just in an extraordinarily creative place—so much so that I need to get him to focus so we can finish this. But music is his refuge right now.”

Shawn “Jay-Z” Carter has a whole lot to be proud of in 2011. Jigga came up in the rap game from practically nothing, to having a successful chain of 40/40 nightclubs, the mega successful Roc Nation, owning a portion of the New Jersey Nets NBA team and his new Life+Times website among many, many other ventures. It’s safe to say that practically anything this man touches turns to gold. Not to mention Jay-Z is married to an equally successful and gorgeous woman, Beyonce Knowles.

But there is way more to Jay-Z than meets the eye. The Marcy Projects rapper spoke with Delta Sky Magazine recently about his upcoming collaborative album, Watch The Throne, with Kanye West, his latest business ventures, and what has got his brain ticking these days.

The inspiration to write his book, Decoded

After being on her show [Oprah], I thought, ‘Man I need to broaden this out and open up this conversation and give it context.’ Because people were making judgements on the music and the writing without knowing really what’s being said or why.

On Rumors that he is a part of a secret society

I may sound a little arrogant but I just think people can’t handle when somebody is successful. Something has gotta be wrong; you gotta be down with some higher power. And I guess when someone else is successful; it makes you feel like maybe you’re a failure. So it can’t be you, it has to be some other force.

On ‘Watch The Throne’

Ye is just in an extraordinary creative place — so much so that I need to get him to focus so we can finish this. But music is his refuge right now.

On having empathy for those around him

I wish I could have everyone change places for a day. I think that’s all it would take for everything to change. Empathy. It’s easy for me to empathize because I’ve really seen it. I’ve been there so I can never forget that. My job is to speak out and provide opportunity. Of course, [it feels good to be looked up to] and your ego tells you that you want more of that –but you don’t want too much of that. Fame is a super drug. I’ve seen so many people take it and just go the wrong route. I just try to stay quiet and not get caught up in all of the noise of what this means or what my brand means. Just try to remain, you know, a normal human being.

Check out a few of the low key photos from Jay-Z’s Delta Sky shoot below, and read the full interview here.

Comment by Ahenmokhai Sebastian Drew on May 10, 2011 at 11:17am
Ride on Brother.. Keep doing what you doing man. You're my mentor.