Look who's coming around after all.
Joe Jackson, who previously said that he spends most of his time in Las Vegas and that his estranged wife, Katherine, would handle the raising of Michael Jackson's children, is now petitioning the estate for his own monthly stipend. 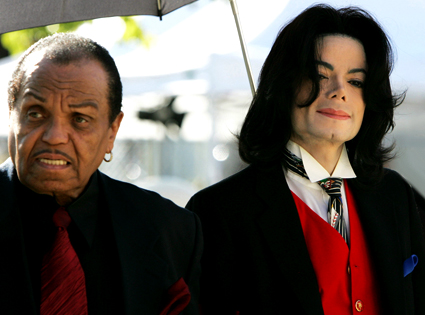 Saying he has no steady source of income aside from $1,700 a month from Social Security, Jackson stated in court documents that he had relied on his son for support up until the King of Pop's death. Michael gave money to his mom, which she in turn, acting as an agreed-upon go-between, gave to Joe.
Michael did not provide for Joe in his will, rather splitting his estate among his mother, children and various charities.
But that doesn't mean the King of Pop's estate is legally prohibited from providing for Joe, his lawyers insist.
The administrators of Michael's estate were "either ignorant or negligent" by not apportioning an allowance for Joe, states the petition filed yesterday in Los Angeles Superior Court.
Meanwhile, a judge has approved $26,800 in monthly support for Katherine and $60,000 a month for the care of Michael's three kids.
Joe is 81 and, in addition to suffering a stroke in 1998, suffers from diabetes, ulcers and other ailments, according to his lawyers, and Michael, knowing his dad was in ill health, supported him for many years.
A list of the Jackson family patriarch's itemized expenses included $1,200 a month in rent for his Vegas home; $2,500 to eat out; $1,000 on entertainment, gifts and vacations; $2,000 on air travel and $3,000 on hotels.
Maybe figuring Joe will just have to eat in more often, a judge denied a request for an expedited hearing on the matter.

Comment by femi on November 11, 2009 at 8:10am
na stupid man,his looking looks irresponsible to me,well abroad no get respect

Comment by Chika Uche Dudu on November 9, 2009 at 8:08pm
The issue is that the king of pop is death,Since the father is there let him enjoy my people, even if he was bad to his son,he is still his father,

Comment by Osamuyi on November 9, 2009 at 7:56pm
How can the " King of POP's " father be surviving on Social Security, when complete strangers are eating and vomiting at his table. The old man deserves his share....common people.

Comment by Victor on November 9, 2009 at 2:53pm
Moses, Ola and co. you must not comment on every issue, if you dnt know or dnt understand the issue, its better you keep quiet. Moses, what do you know about America and who told you that its a taboo for a father or elder brother to have a share in a dead brother's or son's inheritance? Its better you dont talk about what you dont know.

The Jackson's issue is a family matter and would be treated as one by learned men that respects the law. You guys should stop making a big deal out of it; Its not gonna take time to be resolved.

Comment by Id-Aj on November 9, 2009 at 2:49pm
Why should a father be expecting to inherit his sons?

Comment by Moses K Tawose on November 9, 2009 at 1:29pm
America has no culture or norm of what is right rather they're adapting to fit their needs. In Africa it's a taboo for parent or older ones having any role in the inheritance of their siblings or somebody that's younger. Such is not the case in America they want a piece of the dead regardless of how the person died - those inheritance are regarded as for keep sake or a mementoes.
This is why America is America - whatever you can come up with and its new and acceptable there it goes. The land of opportunity and Gods own country - God Bless America.