Monday, March 8, 2010
In the past few weeks, the internet has been inundated with offensive photographs of an accident scene where a driver allegedly crushed to death 19 robbery victims at the Obalende area of Ijebu-Ode in Ogun State.

Fresh details have, however, emerged on the incident, as the man who drove his truck over the robbery victims has cleared the air.

The incident, according to him, happened on July 31 2009. And contrary to the general belief that the driver of the ill-fated luxury bus was ordered to run over his passengers by the bandits, the man whose vehicle crushed the robbers was actually the driver of a truck.

The Edo State born driver spoke with Daily Sun at the police headquarters, Louis Edet House, Abuja at the weekend. He said he ran over the passengers thinking they were barricades put on the highway by armed robbers. Giving a graphic account on how the 19 robbery victims met their gruesome death, Osayande Idahosa, 40, said he was driving a Seaner Truck with registration number XN 808 BEN on July 31 last year from Benin en route Lagos.

According to him, he was in company with his conductor, Lucky, and the woman who hired him for the trip. The woman, he said, was going to supply some bags of garri.

Idahosa said he encountered a huge traffic jam at Ore but said he decided to continue the journey because of the nature of the goods in the truck.

He said he noticed that there were no other vehicles on the road until he sighted the headlights of some vehicles at Obalende area of Ijebu-Ode. “When I saw the lights, I was happy. I did not know that it was an evil light that will continue to haunt me till eternity,” he said.

Idahosa said immediately he approached the vehicle, he sighted some barricades that looked like logs of wood on the highway. “I thought it was a police check-point, so I slowed down. But I started hearing gun shots. I saw many people firing at me. Out of panic, I decided to run over what I assumed were logs of woods. 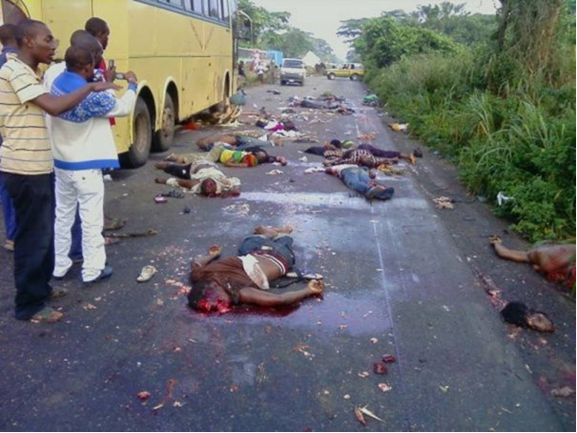 “As my truck ran over the ‘barricades’, I noticed that they were too soft. I also heard gun shots and agonizing cries of people. I suspected that I must have killed some people but I did not know who my victims were. I couldn’t control the vehicle and it ran into the bush. I immediately jumped down and took to my heels. “While in the bush, I saw about 20 armed men in civilian clothes searching for me. They were boasting that they would soon fish me out and slaughter me in pieces. At this time, I did not know the fate of my conductor or that of the woman who hired me.”

He explained that while the armed men where searching his vehicle, he ran deeper into the bush where he found a hole in which he hid. The incident, he said, occurred about 9.45p.m. He said he continued hiding in the bush till six the following morning, August 1. Idahosa further said that in the morning, he started hearing the sound of siren and he saw some of the robbers fleeing the scene. When he suspected that the robbers were all gone, he now traced his way to the highway, he explained.

According to him, when he got to the road, he saw another driver who told him that those he ran over were actually human beings. Idahosa was reportedly advised not to venture near the scene as he would definitely be lynched by the angry mob who were still in shock at the huge number of corpses that littered the road. His driver friend, he said, dropped him off at Ijebu-Ode junction where he picked a commercial motorcycle to the Obalende police station and surrendered himself to the policemen on duty. The cops reportedly took his statement and advised him to go back to the scene as the Commissioner of Police, the Divisional Police Officer and other senior policemen were there for an on the spot assessment.

Idahosa said when he got to the scene and sighted the havoc committed by him, he bent down and wept. He then allegedly surrendered himself to the mob who were walling uncontrollably. “But rather than stoning me to death, they all started listening to my story on how I unintentionally killed innocent robbery victims who I mistook to be robbers’ barricades. The sympathizers started consoling me, telling me it was not my fault. The policemen took me along with them and I was with them for four days before I was granted bail.”

He revealed that for the next one month, he couldn’t stand the sight of meat. “Right now, I won’t engage in a night journey anywhere. The pain is too much for me to bear. My wife is devastated. You can’t imagine the agony I go through everyday when I remember how I crushed 19 innocent people to death. But I trust that God will forgive me because I did not know that they were human beings.”

Driver of the robbed Young Shall Grow luxury bus with registration number XF 285 AKD, Okechukwu Okafor, blamed the tragedy on the bad condition of the road.

He revealed that, on the fateful day, he was on a morning trip from Enugu en route Lagos. The journey, he recalled, was smooth until 3.00p.m when he met a traffic gridlock at Ore. He said he was in the traffic for over four hours. In his words, on reaching a point between the Federal Government College, Odogbolu and Babcock University junction along the Ijebu-Ode/Shagamu Expressway, the luxury bus was forcefully stopped by a gang of armed robbers numbering about 50.

According to him, when he saw the intimidating number of the bandits, he jumped out of his bus and took to his heels. He revealed that while in the bush, he was hearing gun shots and wailing of people in agony. “I thought it was the robbery gang that was killing my passengers. It was not until the following morning when I found my way out of the bush that I learnt that it was a truck driver who refused to stop for the robbers that ran over my passengers.”

Okafor said he wept when he was confronted with the crushed bodies of the passengers. “You know, right from the park at Enugu down to the scene of the ugly incident, we had all become friendly. In fact, in my 22 years of driving, I had not seen or heard such a story that looked like a fairy tale.”

“Following some offensive photographs being posted on the internet by some mischievous people who made the incident looked like it happened recently, the force would like to inform the public that the ugly accident happened on July 31, 2009,” he said.

He said 19 passengers of the luxury bus, including six females and 13 males, were crushed to death by the truck.

He explained that the file in respect of the case has been duplicated and forwarded to the Director of Public Prosecution (DPP) for legal advice.

Comment by Emmanuel Nwabugwu Chibunwanne on October 29, 2010 at 12:15pm
this country is full of sh****tttss, this is how hundreds of pple dies everyday, what kind of barstard country is this?..........but i think the picture is too bad to be posted on the internet, we have alot to be done, all the fedral roads are too bad, no street light, no road marks, no trafic lights, to good policemen on the road, no expert emergency, the roads are not wide enough to be compared with international standards, yet.........we are called a nation? a whole country with everything on earth, but yet we are losing lives all day, .............all of those who are responsible to all these things will finally find themselve in a hellfire, bcs thata is where they belongs.

Comment by ebenych on March 12, 2010 at 7:56pm
so...if the mischievious poeple did not post the picture on the internet,the senate and by extension the rest of nigeria couldn't have seen or known what happened and the called investigations wld have been buried like most others...gibberish...

Comment by oladipo oladele on March 10, 2010 at 7:47pm
Am afraid of this county oooooooo

Comment by Onyemeziekeya Calista Chinedum on March 10, 2010 at 6:28pm
May I ask the Force Public Relations Mr. Emmanuel Ojukwu who referred to those who posted picture on the internet as being mischievous what level publicity was made on this incident when it happened?.
This is pathetic. May their souls rest in peace.

Comment by Banjo on March 10, 2010 at 8:07am
The question is not whether it happened July 2009 or last week, these deaths were caused by these armed robbers, that forced these poor souls to lie on road at night. The pertinent question is where are the perpetrators of these heinous crime!!!
I read all the comments and it strikes me nobody is concerned that the bastards that commited this robbery have not be arrested and no suspects in custody nine months after the incident. We need to get our priorities right in this country!!!

Comment by KING AYO.1 on March 9, 2010 at 9:44pm
Foolish enough, you mean nigerians dont know that the incident happened last year? Even the lawmakers can be so naived. Anyway, the bottom line is that nigerian roads are not safe.

Comment by xnuts on March 9, 2010 at 6:23pm
The police force should grow up. They think they can fool us. Why did it take them this long to publicize the investigation. Let them go and do the real job of curbing crime rather than indulging in unwholesome activities. They are saying all these to give the impression that they know what they are doing.. Naija police put your house in order. May God grant the souls of the departed peace.

Comment by Muyiwa on March 9, 2010 at 5:27pm
SOMETHING IS NOT RIGHT, WHY IS IT JUST BEEN REPORTED, ANYWAY SHA THEY HAVE GONE MAY THEIR GENTLE SOULS REST IN PERFECT PEACE.

Comment by tessy on March 9, 2010 at 4:58pm
Franca
i don't know how u reason with your ANUS, so that means that u are not current with things Happening around you.
so if they dey tell u say 500 PEOPLE DIED IN JOS in 1995 , u will believe.
why was it no reported then or why is the HOUSE OF REP. INVESTIGATING it now.Cockroach head.