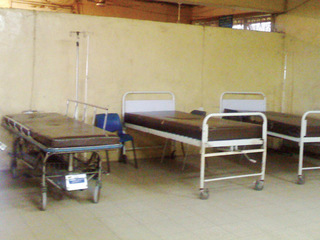 Homicide detectives at Panti, Yaba, have began investigation into the death of a teenager, Uju Onwuzuruigbe, who allegedly died from complications arising from an unsafe abortion.

Miss Onwuzuruigbe, 18, bled to death on October 22 at her parents’ house at Shuribu, in Ajangbadi, few days after an auxiliary nurse, identified as Joy Temi, performed an abortion for her. Her parents reported the matter to the police; and subsequently her lover, Peter Chukwunakwe, and the nurse were arrested.

The victim’s mother told her story. “Uju be my daughter and she is the fifth child wen I born, dem plenty wen I get,” she said. “But on the 22nd, she come home tell me her mama say her belly dey pain her. She come say make her I give her hot water to drink. As she drink and she still dey cry, dey roll for bed say her belly still dey pain her. I come ask her say wetin happen she say na stomach, but around 5.30 am she come dey shake say she wan die. I tell her say she no go die make she tell me wetin happen. Na so she come confess say, ‘mama, I don do you bad, na belly I remove.’ She tell me about the nurse, na so I come hear about wetin happen to my daughter. As she tell me these thing, na so she come die. We come go report the case to police.”

Both the nurse, Ms Temi, and the alleged lover, Mr Chukwunakwe, denied procuring abortion for the deceased. “She came to me on October 7th that she has a venereal disease, that she was having discharges,” said Ms Temi. “I gave her Gentamicin Tablet and she went home. It was after some days that the police came and arrest me that I did abortion for Uju. I am a trained nurse and I got my certificate at the Falati Hospital. I did not do any abortion for her, I only treated her for a virginal infection and it is not an STD she had.”

Mr Chukwunakwe agreed that he dated the deceased, but denied knowledge of the pregnancy. “Uju is my girl friend and I have known her for more than one year,” he said. “She did not tell me that she was pregnant and I did not take her for any abortion, so I do not know anything about her death.”

Ambrose Onwozurigbe, the father of the victim, said he is not interested in prosecuting the case. “I want make police release my daughter dead body make I go bury her,” he said. “Her body dey for mortuary and doctors no dey to do autopsy for her. Wetin don happen don happen. E no good make she dey there dey smell, her spirit no agree rest and we want carry her go burry her make her spirit rest, so we want make police release her body to us.”

Investigations into homicide cases in the state are being stalled following the strike by Lagos doctors. A morgue attendant at the Isolo General Hospital, who did not wish to be named, confirmed that cases of corpses without autopsy reports have increased in the last two months as a result of the doctors’ strike. “One thing you should know is that detectives cannot do their work especially in homicide cases when there is no autopsy report to prove the causes of death,” he said. “Many people are just coming here to claim their corpses without due autopsy report because the doctors that will carry it out are on strike. So people must bury their dead, and I can tell you that because of this strike, the corpses at this general hospital have increased.”

Comment by Engr. Joseph O.E. Enemali on November 4, 2010 at 7:38am
People should learn a lesson from this particularly young ladies. No fear of God anymore! Parents should give birth to a few u can maintain, and don't endanger the lives of these children by your inability to provide for their needs consequently exposing them to sexual immorality and harlotry

Comment by ogechi on November 3, 2010 at 2:17pm
Too bad, May her soul rest in Peace,
Mothers should monitor their daughters very well so that the can be able to observe when there is changes in their body so as to avoid this kind of pathetic story .

Comment by Toyinbo Cross olusola on November 3, 2010 at 5:59am
only the living can defend themself. but the dead; naaaaaa!

Comment by DAVID DAFE ADOMI on November 2, 2010 at 11:17pm
The story is pathetic, may God give the family strength to bear the lost & may her soul rest in peace.

Comment by Moses K Tawose on November 2, 2010 at 10:57pm
All the player in this case would not take responsibility, why not cut your losses to move on. When things are budding its easier to nip not when it has become bigger such as in this case. Agreed she was young and naive, but how could she do that to her mother not to be able to confide in her before doing what she did. To make the matter worst those who could has shed light into what really happens were on strike. Its only in Nigeria Medical Professionals goes on strike abdicating their ethos. I held the father in high regard and if not the mother it would have been a foregone conclusion which how it should be letting her spirit rest in peace. I don't encourage it where the perpetrator of a crime would be walking free scot free, but the situation at hand isn't helping the matter a bit with their strike either. What do we do in such a case than let go and let God.

Comment by Otaru Dickson on November 2, 2010 at 10:28pm
the family of the diseased to bear the lost and may her soul rest in peace