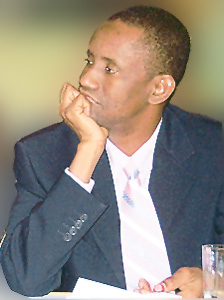 without having some sort of liking for him. I saw the embattled pioneer chairman of the Economic and Financial Crimes Commission for the first time at a 'state of the nation' symposium organised by the Nigerian Liberty Forum at the Metropolitan University, London, on May 29, 2009. A man whose slender frame and boyish looks often mask his lion heart and iron resolve, Mallam Ribadu easily stole the show at the gathering. He was literally mobbed as he entered the hall, and as he stood to speak, almost everyone, as if by some sort of invisible instigation, stood up in respect, and remained standing for a long time.


I was never a fan of Nuhu Ribadu's methods as the EFCC chairman. I still hold the EFCC under his watch partly responsible for the joke that was the 2007 elections. I had written about his recent travails as a comeuppance for his misdeeds as chairman of the financial crimes buster. I had strongly disagreed with arguments that he meant well despite his obvious excesses, noting that even the road to hell is paved with good intentions.

Ribadu spoke on Nigerian unity, making what some people would regard as a populist appeal for Nigerians to overcome their differences and come together to reclaim the Nigerian state from the grips of a corrupt and visionless elite. He argued that there was really no substantial difference in the needs and aspirations of ordinary Nigerians, irrespective of their ethnic and other primordial differences, because "all they ask for are the basic necessities of life." For Ribadu, the Nigerian elites like to harp on the differences among Nigerians because it is in their interest to do so, to "keep us divided". He called himself a simple Fulani man, whose role model had always been Gani Fawehinmi, a man he said he would name Abuja after, if he had his way. He rhetorically asked, to thunderous applause, whether we are being fair to the likes of Wole Soyinka and Anthony Enahoro, who had given over 50 years of their lives to the struggle to make Nigeria better, but are still forced to remain in active service. in their old age, because the problems of the country appear to remain intractable.

I respected Mallam Ribadu for not using the forum to get back at the Nigerian government, his current traducers. He wisely focused on positive messages, admitting that mistakes were made when he was boss of the EFCC. There was something about the way he spoke that touched most people in the audience, including those of us who are his ardent critics. It was easy to believe that he spoke from his heart rather than from his head.

As Ribadu spoke, I noticed that a Nigerian lady sitting next to me was struggling to hold back her tears. "This is a very honest man, a very rare Nigerian," she muttered, more to herself. I tried to engage her in a discussion. I agreed that Nuhu was obviously an honest man, who meant well and had a lot of passion for the job he did as EFCC chairman. I however disagreed that his good intentions were enough excuses for some of his unacceptable methods. Her facial expression changed as if I had uttered a heresy.

"Whether any one likes it or not, he will be our next president," she muttered and moved farther away from me as if to clearly indicate that she did not want to pursue that discussion any further.

Nuhu Ribadu for president? Though not his supporter, I have always believed firmly that in Nigeria's game of musical chairs, his rehabilitation would be only a matter of time, and his traducers would inevitably one day take their own turn of being painted as villains. This is one of the iron laws of our politics: there are no permanent messiahs or permanent villains. Just think of Abacha, the poster boy of Nigerian dictatorship and corruption, and the efforts made not long ago by a section of the country to rehabilitate him.

In the Tube (underground train) on my way home from the symposium, I found myself standing next to three gentlemen who had apparently also attended the event. The discussion was again on Nuhu Ribadu.

"He is very inspirational. He is our Obama," one of the three men, who looked Caucasian to me, declared. I decided to barge into the discussion but resisted the temptation to ask the gentleman if he was indeed Nigerian. I asked whether the genius of Obama was because he was inspirational or because he was post-racial, and a reconciler, with wisdom and a good organisational sense.

"Nigeria needs an enlightened leader who can inspire confidence in Nigerians, whom Nigerians will be proud of, and who genuinely wants to transform the country," he declared.

I agreed that Ribadu inspires confidence and will make a genuine effort to transform Nigeria if he becomes president of the country, but again expressed concerns about his democratic credentials. I reminded them that when he was boss of the EFCC he virtually kidnapped or forced some House of Assembly members in Plateau State to impeach their governor. I also reminded the three gentle men that during the 2007 elections Ribadu appeared to sit in his office and decide which people to disqualify from running for office before finding evidence against them.

"I don't think you will vote for him, will you? Your question to the founder of Sahara Reporters [the online blog] gave you away," the bulkiest of the three, with obvious Nigerian features, said, with a smile of superior wisdom. I had asked Omoyele Sowore if he ever saw anything good in the Nigerian government. I also accused him of appearing to romanticise the Niger Delta militants, and of failing to distinguish between the cause they espouse (which most Nigerians support) and their methods (which many find abhorrent).

"Look brother," began the third man, "we Nigerians made Obama President of the United States. More than 25 percent of the people who organised and knocked on doors for Obama are Nigerians. Nuhu is not perfect. But do you think any of the people currently being touted as presidential candidates in Nigeria will be better than Nuhu?" He had a slight Igbo accent.

I agreed with him that if Nuhu ever became Nigeria's president, it would never be business as usual and that he would be prepared to give his life to make a difference. I however once again reiterated my concern about his antecedents, including a tendency to be carried away by emotions.

As we disembarked and went our different ways, what became obvious to me was that Nigerians had not heard the last of Nuhu Ribadu.

Comment by Tari on June 11, 2009 at 2:16pm
Do we ever hear the last of Nigerian politicians ? Like the Phoenix they have a way of resurrecting. LUKMAN is back and I bet a whole lot of them are yearning to stage a comeback