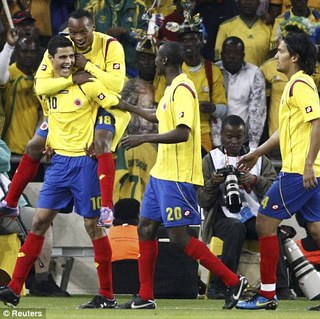 The Colombian football team has been robbed in South Africa two weeks before the start of the World Cup.
The team lost £1,800 pounds worth of U.S. dollars and euros on Tuesday after players were targeted at their hotel in Johannesburg.
Two female workers at the five star Hyde Park Southern Sun were arrested for allegedly taking the cash from the players' suitcases after they arrived to play an international friendly against South Africa.
Police spokesman Eugene Opperman said the pair had been charged with theft and appeared in court.
He said: 'They are accused of taking the money after going through suitcases and bags in several rooms on May 25.
'We were informed about the theft the following day and officers investigated. The suspects were cleaners at the hotel. They were arrested at the hotel and are being held in custody.
'It appears it was an inside job.'
The theft allegation is likely to be seen as a major embarrassment to South Africa so close to the start of the tournament.
South Africa's Times newspaper named the pair as Lucky Mahlatsi, 25, and Jeanet Mashimbyi, 29, from neighbouring Lesotho.
They will reappear in court next week.
Charges against a third woman were dropped because of lack of evidence.
The Colombian national team, who did not qualify to play in the World Cup, arrived in South Africa on Monday.
Last night they lost 2 - 1 in a friendly against the tournament hosts at the flagship Soccer City stadium.
The Hyde Park Southern Sun will host England's group stage rivals Slovenia during the tournament.
The eastern European squad is expected to arrive in South Africa on June 7.
Some of the 31 visiting nations have already arrived in Johannesburg and other teams are expected over the weekend..
Organisers have repeatedly stated their confidence in the ability of the police to protect players' and fans during the tournament.
But last year officers were called to investigate theft charges against the Egyptian national team during their stay in South Africa.
The players lost around £1,600 in U.S. dollars after being targeted at their Johannesburg hotel during the Confederations Cup.
Today a Fifa spokesman declined to comment on the robbery but said the security arrangements in place for the Colombian team's visit were not the same as those that had been arranged for World Cup teams.