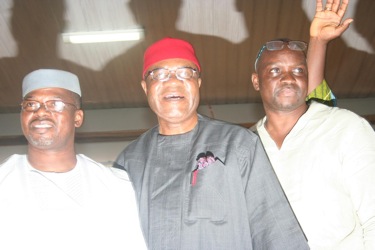 To the removed governor and his party, the Peoples Democratic Party (PDP) the judgment was a rude shock more so as the verdict of the lower electoral tribunal had ( in a unanimous decision) in December 2008 declared Segun Oni as duly elected. To the Action Congress (AC) and its governorship candidate, Dr.

Kayode Fayemi who was petitioner/appellant in the legal battle that lasted more than twenty months, the verdict was a welcome development and a thumb-up for the rule of law. Huhuonline.com checks reveals that to the ordinary citizen of Ekiti State , the verdict was a call for apprehension because of the pervasive air of uncertainty that surrounds the re-run election in some 64 wards spread across ten out of sixteen local governments in the state. The perceived apprehension is not misplaced after all in view of certain developments in the state since the April 2007 elections. Our investigation revealed that the two parties contending for supremacy exhibit almost equal strength in all the political manoeuvrability displayed so far. The 26-member house of assembly consist 13 PDP and 13 Ac legislators.


The level of strength accounts for lots of tension within the house and between the house and the executive arm of government. Most decisions of the executive arm of government, for example the appointment of commissioners, had been carried out in a controversial manner. The appointment of the commissioners was presented by the former Governor Segun Oni to the old house assembly before the current house was inaugurated. Another controversial issue is the appointment of State Independent Electoral Commission (SIEC) which is still an issue before an Ado-Ekiti High Court following a suit file by the AC in which the ruling party was alleged to have violated due process. The local government election that was conducted in December 2008 by the contested SIEC was boycotted by the AC. These are a few instances of the index of tension in governance in Ekiti State .


Following the verdict of the Court of Appeal, the Speaker of the house (a PDP legislator) Rt. Honorable Olatunji Odeyemi was sworn-in as Acting Governor, while the Deputy Speaker- Hon. Saliu Adeoti (AC) became the Acting Speaker. The tension between the House and the Executive arm of government seem to have increased since. While the house wanted all political appointees of Engineer Segun Oni to be relieved of their position, the PDP has resisted and the acting governor has merely suspended Segun Oni`s commissioners while other political appointees are still in place with government machineries at their disposal as a possible threat to level playing ground in the re-run election.

The two parties (PDP & AC) appear desperate to have a hold on government machinery through the re-run elections. Electioneering campaigns so far have been marred with violence leading to death of at least one person (at Oye local government) and destruction of property and injuries to many people at Oye and Ise-Orun local governments. There are various postals around town with horrific captions like rig and roast. The position of the police command of Ekiti State does not appear neutral as there are numerous complaints of complicity between the police and the PDP.

Mr. Ayo Fayose and the main-stream of the PDP led by Segun Oni. Attempts to reconcile the two factions by Abuja have failed. Fayose has come out openly canvassing for the populace that Segun Oni does not return to the State House in Ado-Ekiti. And whatever anybody feels, Fayose is an ardent grass-rooter with a large following: in any event whether peaceful or otherwise, Fayose would be a factor to contend with.

As the re-run election draws near, it would require an objective steps on the part of the Independent Electoral Commission (INEC), the police, community leaders (such as traditional rulers) to avert a catastrophe that could lead to another state of emergency in Ekiti. This is obvious in view of the desperation of PDP and AC and their almost equal strength. While PDP is basking in euphoria of being in control of Federal Government and implicit control of INEC and the security apparatus; AC relies heavily on the populace and the fact that it had the higher votes in the remaining legitimate votes in the disputed elections of 2007 as contained in the verdict of the Court of Appeal.

Comment by daso feyiropo nelson on March 25, 2009 at 9:32am
why cant u people in ekiti give peace a chance in ekiti u shud have allow uncle segun to complete his tenure,meanwhile pdp we still carry d day at d end of d day.