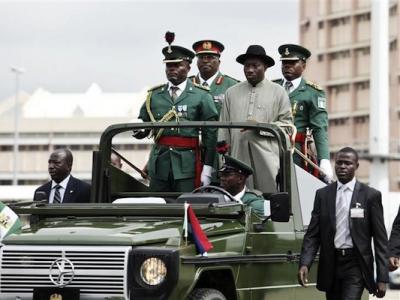 Lagos residents returning home after work were today held up in endless traffic congestions following the closure of all key roads, which lead to the Murtala Mohammed International Airport from Victoria.

The roads closure was traced to the visit of President Goodluck Ebele Jonathan (GCFR) to Lagos metropolis, a situation which sparked anger and pain among Lagos residents who were returning after their stressful day. .

There were fierce-looking officers of the Nigeria Police Force (NPF) at different junctions of the closed roads, especially those leading directly to the popular Third Mainland Bridge, Oshodi-Apapa Expressway and Funsho Williams Avenue.

we gathered that the closures started more than one hour before the convoy of President Jonathan passed through the routes.

The roads were closed at about 6:15 p.m. by security operatives but were not opened until about 7:33 p.m. after the convoy of President Jonathan and his entourage had driven through the Third Mainland Bridge heading to the Murtala Mohammed International Airport.

Thousands of road users and motorists, who were held in the traffic, were visibly furious and angry; bitterly lamenting that such blockage or closure was unnecessary during a democratic dispensation.

Precisely around 7:28 p.m. after the convoy had passed, a good number, who had alighted from their respective vehicles, were angrily booing President Jonathan, though security operatives scared them away. .

Before the roadblocks were dismantled, we spoke with a number of road users, who were held in the traffic jam, which covered a distance of more than five kilometers and in some cases more than that.

A banker in one of the new generation banks, who plead anonymity for security reasons over the situation, saying he was fortunate to have closed early, but the hold-up had shattered the plan of being with his family on time.

The banker expressed concerns about the capacity of President Jonathan “to guarantee fundamental human rights in different spheres of life. The idea of blocking roads because of the president is uncalled for.”

Another resident, Mr. Segun Balogun told us that the visit of the President to Lagos metropolis “has always been a source of concern and worry due to the tradition of road closure.”

Balogun condemned the tradition, which he said, had put road users and motorists under unnecessary stress.

In his response, Special Adviser to Governor Babatunde Raji Fashola (SAN) on Transportation, Comrade Kayode Opeifa appealed to Lagos residents to bear with the state government after the hold-up eased few hours later.

Opeifa added that traffic congestion experienced “all around Lagos roads was due to road closure from Victoria Island to Murtala Mohammed International Airport arising from presidential visit and the consequent closure of Lagos roads by the security operatives of the Nigeria Police.”

The special adviser asked Lagos residents to be patient, saying the roads would be opened as soon as the convoy of President Jonathan passed through the Victoria Island en route the airport.

Comment by Moses K Tawose on December 22, 2010 at 11:25pm
They're supposed to know better. They cannot continue to compound their problem with such unplanned road closing without an alternatives for the people that pays their salary.I do believe better job would be done next time around.

Comment by Alabi on December 22, 2010 at 11:27am
I tthink Mr. president we see the lament of his citizen, as a good Goodlock we expect some positive respond / speech to those that affected (Inconveniences). Democracy for ever.

Comment by THE QOHELETH on December 22, 2010 at 11:01am
PEOPLE SHOULD BE INFORMED ABOUT SUCH EVENTS AND GIVEN ALTERNATIVE ROUTES FOR THEIR CONVENIENCE. THAT'S HOW IT IS DONE IN OTHER PARTS OF THE WORLD. THE ORGANIZERS SHOULD ALSO MAKE SUCH MOVEMENT VERY SHORT AND SNAPPY.

Comment by DR. B.J OJO on December 22, 2010 at 10:08am
Sometimes Nigerians vent their anger on wrong issues. It is not only in Nigeria that roads are closed for Presidents to move. Everywhere in the world, the Presidents movement is strictly monitored to give him the needed security. We should always be positive in the way we view things especially when it concerns our leaders. Remember General Murtala Mohammed was killed in a traffic Jam there in Lagos when he went out without the usual road closure, thinking of the so called human rights. Sometimes we will be coming to work only to meet the roads closed because the President or probabaly the Prime Minister is passing bye, no body complains since it is a normal routine. We really need to know how  to use our tongues in positive ways in Nigeria. I have interacted with leaders in Africa, but each time we talk, the conclusion has always been that what they see when they visit Nigeria is usually contrastive to what they read or hear about Nigeria. I think the time is up for us to start viewing and talking about Nigeria in a positive way. Happy Christmas.

that is nonsense, in a country where human beings are not respected  thats how things work,what if their is  pregnant woman or a sick person that is going to hospital ,so they should die because the person they voted to make thing easy for them is passing,what saddens me is that ,this so called leader go abroad frequently and see how their leader move about , if is the president ,police may divert other road users to other nearest road for them to continue where their going and that is when traffic is much not to park more than a million road user at a place because the president want to use the road ,gorvernors are not noticed when useing the road

Lagosians are the bomb, i love dat. we have been fools in abuja for so long.....

When will Nigeria grow out of these madness of road closure, causing innocent citizens more pain, because a president or one lousy VIP is using a route? Its only in Nigeria and similar "Banana republics" that you see road closed to other road users because a president want to pass with his convoy! What is the president afraid of if he cannot mingle freely with his "citizens" who voted  him to power, and wants their vote again in 2011? At least he has his chain of security personnel with him.

public offices needed to be demysitified by all means, including making political offices less lucrative than it is at the moment. Politics is just too much rich pickings in Nigeria.

No matter your perspective on the presidential security arrangement, i can bet anyone out there that you may have done the worst! Its quite sad that the road network in lagos is very bad but frankly speaking the security network of a president cannot be jeopardize on such excuses. Nigeria is very porous to threat of all sort so lets not boo the president for doing his thing. After all even OBJ who is now ex is doing the same thing.