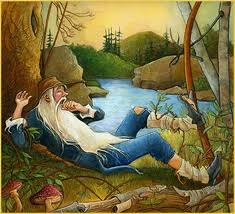 Irving titled Rip Van Winkle. I still remember my excitement watching the cartoon version of the story on Lagos Weekend Television (LTV) in the 80’s. Seeing one of my favorite tales come to life before my eyes was a joy unparalleled! For those of you who’ve never heard of this classic fiction, I’ll do you the honour of summarizing the tale:

The story is set in the pre- American Revolution War. Its central character is a man, Rip Van Winkle, who lives in a village at the foot of the Kaatskill Mountains along with his kids and nagging wife (Dame Van Winkle). He is well loved by the kids in the village because he often gives toys and entertains them with stories. He enjoys solitude and has a penchant for idleness which often incurs the wrath of his nagging wife. She complains incessantly about his lack of industry and neglect for his farm land which is constantly in disarray.

On one fateful autumn day, Rip escapes into the mountains with his dog, Wolf, to escape a barrage of nagging from his wife. As he wanders along he hears someone calling his name. On proceeding towards the direction of the voice, he comes in contact with a man dressed in old fashioned Dutch clothing. The man asks Rip for help and without hesitation, he assists the stranger in carrying a keg of rum all the way into a hollow-like Amphitheatre in the mountain. There he meets other men similarly dressed like the stranger, playing ninepins and drinking rum boisterously. He soon joins them in their drinking and revelry and before long, falls into a deep sleep.

He awakens and it is morning. He skin is wrinkled, his beard is long, his gun is old and rusted and Wolf is nowhere to be found. He returns to the village to find out that he has been asleep for 20 long years; his wife is now late, the American Revolution has taken place and his close friends have all died in the war. Someone calls out to a man called Rip Van Winkle who turns out to be his son, now a grown man. He is eventually taken in by his daughter who’s also now a full grown adult.

Such was Rip Van Winkle’s fate; missed out on every detail of life for 2 decades. The last he remembered, he was a young man wandering into the mountains. And now he awakens an old man unable to account for the past 20 years of his life.

I can relate to Rip Van Winkles experience because I too feel like I have been in a coma for that long; I can’t really account for the past 20 years of my life. The last I remembered I was an enthusiastic youth looking forward to an exciting future, but I am now in a future far different from what I had anticipated. There are lot of things I ought to have accomplished by now which just didn’t matter to me. Why didn’t they matter until now? Why has my mind been oblivious to the opportunities of the day? What did I do with all that time? How did the grey hairs sneak up on me undetected? Why did I never have a strong desire to get married until now? Why am I living far less than my potential while others who had far less potential at the beginning have gone far ahead? Why was I so comfortable with my self-imposed limitations? What was it that put me to sleep? Why am I suddenly waking up to the harsh reality that the time is short? Why now and not earlier? Just wondering if I am the reincarnated Rip Van Winkle.

This reminds me of Sharru Nada’s account in the all-time classic, The Richest man in Babylon. 40 years ago he arrived at Babylon a slave, and saw some labourers toiling by the gateway leading into the city. 40 years later he returns to Babylon a wealthy free man and notices the same men still toiling by the same spot; they’d had made no progress for 40 years.  God forbid that should be my testimony!

I talked this over with a friend and told him of my painful awakening and he said to me, “anytime a man wakes up, that is morning for him. No need to wallow in regrets. Forge ahead! I have decided from this point on not to allow the latter part of my life become a reflection of my past.

I am going to redeem the time!

(For other inspiring articles on my blog you can visit: http://nigerianphilosopher.wordpress.com/2012/05/11/i-feel-like-rip... )