Is it really true that integrity doesn’t sell in Nigeria? 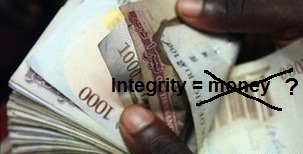 I am sure you’ve heard people say stuff like this. I hear it every day; people saying you can’t make it in Nigeria unless you are a crook. “Integrity doesn’t sell”, they claim.

People who say such things aren’t really thinking about what they are saying. Because if they did, they’d realize their words have no truth in it.

Why would I say such a thing when Nigeria is without a doubt, one of the most corrupt nations in the world? Well contrary to popular belief, integrity sells more in a corrupt society because it’s scarce. Even the corrupt are willing to pay a higher price for the services of trustworthy men/women.

Let me paint a couple of scenarios to prove my point:

Imagine a corrupt politician who embezzles lots of public funds. What bank do you think he’d put that money; the one that mismanages funds or the one with a reputation for honest management?

Which mechanic do people patronize the most; the one who steals engine parts or the one who is dependable?

Who do you lend money to; the one who never repays a loan or the one whose word is his bond?

Who would you hire as a security guard: a thief or a saint?

Who would you choose as a prospective spouse; a potential cheat or faithful partner?

Which company would you rather invest in; the one that pays proper dividends or the one that is known for ripping off investors?

So you see, even though we have embraced corruption as a nation, we really can’t do without integrity. It’s an essential ingredient for survival. We crave the trust and peace of mind others bring with it even if we are not prepared to travel the high road ourselves. The scarcer it is the more people are willing to pay for it (with the exception of a few who’d always want something for nothing). Of course there is much to lose by being honest. Every good thing comes with a sacrifice. But one things for sure, you’re certain to be in high demand in and out of season.

So the next time people someone tells you “integrity doesn’t pay in Nigeria”, you’ll know you’re hearing the words of a bone-head.