Bigwigs grace wedding of Pastor Taiwo Odukoya to S’African RCCG Overseer Adeboye in attendance
Article Excerpts:
Pastor Itua Ighodalo who recently re-married amidst controversy and presumed depastoring was the one who supervised the cake-cutting session and also got the audience reeling with laughter and Pastor Odukoya squirming, as he made some obliquely risqué jokes allowed in a setting of that nature.

Pastor Paul Adefarasin who proposed the toast also riveted the audience with his account of how Pastor Odukoya agonized over how to chase his new wife.

FOUR years after the death of Pastor Bimbo Odukoya, her widower, Pastor Taiwo Odukoya, has picked another spouse. Odukoya, the founding pastor of the Fountain of Life Church, Lagos, wedded a South African, Simangele Zulu, at a subtly-elaborate ceremony that held at Civic Centre, Victoria Island, Lagos, on Tuesday.

This was against a backdrop of longstanding speculations that bordered on his decision to walk down the aisle again.

Amidst heightening anxiety, Odukoya had announced to an astounded congregation last Dec. 27 about his readiness to give marriage a second shot.

He kept the identity of the bride under wraps until Jan. 3 when she was formally introduced to the congregation, who welcomed her with a stimulating applause.

Before unmasking Zulu, there had been widespread talks that purportedly had it that Odukoya was in a relationship with a divorcee and mother of two, who incidentally is a columnist in one of the national dailies.

In her 30s, the path of Zulu, who is a United Kingdom-based music director, and that of Odukoya first crossed over a year ago during one of his many trips overseas.

The wedding, held under tight security, was graced by prominent men of God, including the General Overseer of the Redeemed Christian Church of God, Pastor Enoch Adeboye.

Pastor Bimbo, as she was affectionately addressed, lost her life in the ill-fated Sosoliso airliner that crashed at the Port Harcourt International Airport on Dec. 10, 2005.

A writer, popular televangelist, highly-sought conference speaker, youth mentor and marriage counsellor, she was one of several individuals chosen by Samsung to represent Nigeria in carrying the Torch for the 2004 Olympic Games. 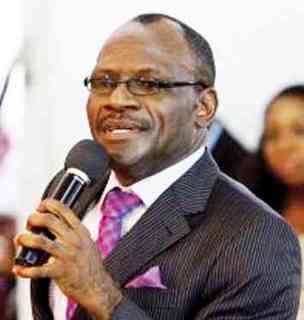 At the time of her death, she was the associate senior pastor of The Fountain of Life Church and the president of Discovery for Women.

She was the host of Single and Married, a TV programme broadcast locally and internationally that dealt with practical issues people face in marriages and relationships guided with biblical principles.

The couple, who were married for over two decades, had three children – Toluwani, Jimi and Tobi.


It was a blend of glamour, fun and spirituality as the senior pastor of The Fountain of Life Church, Pastor Daniel Taiwo Odukoya exchanged vows with his new wife, the former Miss Rosemary Simangele Zulu, a South African.

The event, incorporating the wedding service and reception, took place at the classy Grand Banquet Hall of the Civic Centre, Victoria Island, Lagos.

The event was graced by a retinue of who is who in what is known in Christendom as the vineyard of the Lord.

The occasion also had in attendance the deputy governor of Lagos State, Mrs. Sarah Sosan as well as the first lady of the state, Mrs. Fashola. Some of the very top ministers officiated at the wedding service. The London-based Pastor Mathew Ashimolowo of KICC announced the proceedings of the service. Bishop Mike Okokwo of The Redeemed Evangelical Mission Church (TREM), whom Pastor Odukoya always professes to be his father-in-the-Lord, conducted the exchange of vows by the new couple.

An exhortation which was thought-provoking was delivered by Bishop David Oyedepo of the Winners Chapel. The General Overseer of the Redeemed Church of God, Pastor Enoch Adeboye pronounced the final blessings on the couple.

The service was marked by a medley of musical renditions climaxing with the classical Hallelujah Chorus by a selected group of members of the choir of The Fountain of Life Church.

The bridal train was a nuclear family affair. The two daughters of Pastor Odukoya, Tolu and Tobi were the bridesmaids with the elderly one serving as the chief bridesmaid. Jimi, Pastor Odukoya’s only son so far, was the best man.

The reception ceremony was pervaded by an air of conviviality as the ministers of God who waited for it let down airs, cracking jokes and bantering. The groom, Pastor Odukya was assiduously grilled by the master of ceremony, Akin Oshibajo who is the attorney-general of Ogun State and a pastor in The Fountain of Life Church. He insisted that Pastor Odukoya should repeat the kissing session which he said was done rather perfunctorily during the wedding service. Pastor Itua Ighodalo who recently re-married amidst controversy and presumed depastoring was the one who supervised the cake-cutting session and also got the audience reeling with laughter and Pastor Odukoya squirming, as he made some obliquely risqué jokes allowed in a setting of that nature.

Pastor Paul Adefarasin who proposed the toast also riveted the audience with his account of how Pastor Odukoya agonized over how to chase his new wife.

Pastor Odukoya in a fuller measure thrilled the gathering with an account of the courtship period.

Other guests at the ceremony included some members of the church, friends and family members including relations of Pastor Odukya’s late wife, Bimbo.

Comment by Moses K Tawose on January 14, 2010 at 2:13am
You've giving it the best as a human being and I know she would be smiling with you for holding the forte after her demise to come to this decision. Happy married life again with abundant blessing in all facet of it. Love is the ultimate and I know she would got a full dose of it. You've prove yourself with Pastor 'Bimbo Odukoya what else only for her to return in full measure.

PHOTOS: Nigerian #EndSARS Protesters In The UK Call For Justice