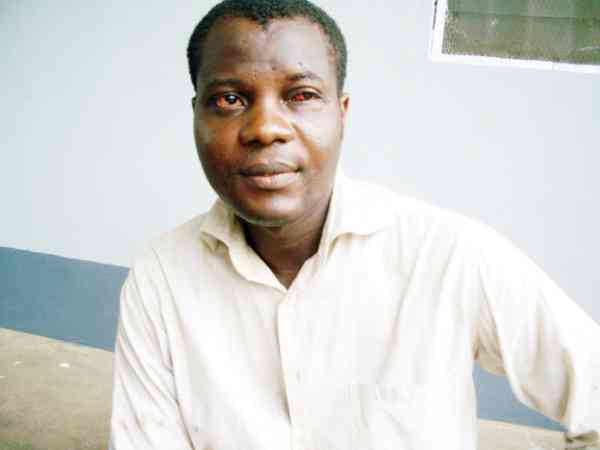 The victim, a primary six pupil, lives in the same compound with the suspect at a suburb at Iju road.

Mr. Arogboto, who had just moved into his one room apartment on Monday, allegedly asked his landlady’s daughter to help him run errands. The suspect allegedly took advantage of the victim, about 12.30pm on Wednesday.

Mr. Arogboto, suspecting that no one was around, allegedly dragged the girl on his bed, locked the door and had sex with her.

The suspect was however arrested when the victim’s elder brother suspected foul play and swooped on him while he was having sex with the girl. The victim’s mother, Bose Ige, said he regrets renting the apartment to the suspect.

“This man who did this terrible thing to my daughter just moved into my house three days ago,” she said. “He told me that he does not know anywhere and that my daughter should help him run errands. On Wednesday, he told my daughter to help him buy rice to eat; I did not suspect any bad thing, so after waiting for sometime without seeing her, I asked her brother to go and look for her. When he got to his room, he knocked but no response, he kept banging the door, but no response, that was how he went round and peeked through the window and saw him have sex with my daughter.”

Mrs Ige said he rushed her daughter to the hospital for treatment and called the police to arrest the suspect. “We took her to the hospital, and it was confirmed that he had sex with her, the doctors are still treating her. I pray that nothing happens to my daughter,” she lamented.

Mr. Arogboto, a 200 level dropout from the University of Lagos, confessed to the crime. He however said that the victim lured him to have sex with her.

“I did not send her on errand, she come into my room by herself and she looked advanced, like somebody who is mature,” he said. “She was the one who put her hand around me, so when I see that, I carried her on my chest and pull my trouser so that was how I had sex with her. I did not release into her, I released into a tissue paper; but all the time I had sex with her, she did not cry, in short, she behaved like an advanced mature person.”

Police spokesperson Frank Mba said the girl is a minor, and therefore cannot give consent to sexual intercourse.

“According to Section 218 of the criminal code, the girl, cannot give consent and what this man is saying is her “consent” is not recognised in law,” he said. “Parents and wards should befriend their children so that they can feel free to tell them anything that is happening to them.

“They should constantly monitor their girls, and people around them, because such thing is done by people who are close to the family, neighbours, uncles, drivers, people who the parents of the girl repose trust in, will turn round and rape, or defile their daughters. If found guilty of the offence, the suspect is liable to life imprisonment.”

In a related incident Senator Yerima aka The Ex Sharia Governor paid 100,000 dollars to marry a 13 year old Egyptian Girl ..

Comment by mobolaji enitan aminu on April 21, 2010 at 1:30pm
this is so sick waaaaaaatttttttttttttt!!!

Comment by Ibrahim Omeiza on April 20, 2010 at 12:21pm
The senator should be arresed for child traffickig. Where is NAPTP and other Federal Organs dealng wih child trafficking. If it happened to ordinary citizen now, they would have arreste the person. Let them show for once that there is no sacred cow in the war against child Trafficking.

Comment by abiodun on April 18, 2010 at 10:40pm
parent should be very careful with d people living around with there children most especially the guys of now adays and be prayerful, i believe God will surely see us through. but as for the old or young fool who rape he should be purnished 4 his deed

Comment by SaintOkocha on April 17, 2010 at 3:00pm
BABY RAPER, THEY PITIED FOR YOU HEAR. WHEN YOU ARE FREED, GO TELL THEM THANK YOU. SHAMELESS OLD BUT A YOUNG MAN.

Comment by SaintOkocha on April 17, 2010 at 2:57pm
People feel comfortable doing and living into evil. Their claim is that it's love. They make jest of people who are not into it and look at you as a Jew guy. What again but this should we expect, when the world is filled with this kind of people who do not have Self and Emotional control. Ok immagine an ex-govnr, who is supposed to be a grand father to a girl is now taking her for a sex machine claiming he is marrying her. "THE WORLD WILL SOON END".

Comment by Samuel Apewalen on April 16, 2010 at 9:28pm
I think he is not a serious person, that was why he dropped out of UniLag, so that he will defile little girls. He is lucky to come out with a red eye, if he try's that with my dauthers heaven will be let loose. shameless pig.