Detroit attorney Kurt Haskell dropped bombshell revelations concerning his eyewitness experience of the Flight 253 attack and how the FBI detained a second man after dogs detected a bomb in his luggage on The Alex Jones Show today. The FBI has not only ignored Haskell’s story, but they have launched a cover-up by refusing to even acknowledge the existence of another man who filmed the entire flight, including the aborted attack, as well as the well-dressed man who aided the bomber to board the plane even though he had no passport and was on a terror watch list.
Watch this space for more stories on this astounding news that the corporate media has completely failed to cover.

Detroit attorney Kurt Haskell appeared on the Alex Jones Show today and detailed his experience at the Amsterdam airport and on flight 253. Mr. Haskell provided information not covered by the corporate media. 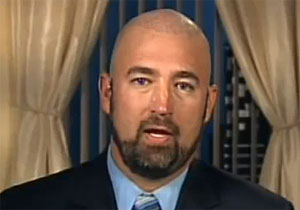 In addition to a detailed retelling of the story he gave the corporate media, Mr. Haskell addressed the unprofessional and lackadaisical behavior of the FBI and airport security after the plane landed at the Detroit Metro airport in Romulus, Michigan. He characterized their behavior as a “complete embarrassment.

They actually put us in more jeopardy than we were already in.”
Passengers were told to remain seated in the aircraft for 20 minutes after landing despite the fact security did not know at that point if there was an explosive on the plane or if the fire started by the suspect Umar Farouk Abdul Mutallab while on descent to the airport had spread under the floor in the cabin or to the fuel tanks in the wings.

After being allowed to disembark from the plane by officials, passengers were detained in customs with their carry-on luggage for six hours while they waited to be interrogated by the FBI, according to Haskell.
At this point a bomb-sniffing dog pointed at carry-on luggage in the possession of a man Haskell described as Indian around 30 years old. Officials led the man away to an interrogation room. Haskell said he was concerned because the bomb-sniffing dog had flagged the man, indicating he may have had explosives in his carry-on luggage.

The Indian man was subsequently led away in handcuffs.
Following this incident the FBI moved the passengers to another location. “You’re being moved,” the FBI told them, “it is not safe here. I’m sure you all saw what happened and can read between the lines and why you’re being moved.”
Haskell said the corporate media refuses to cover this aspect of his story. He has repeated it to “countless” news agencies and they uniformly have not included it to his knowledge.

Mr. Haskell questioned why officials have not released the Amsterdam airport security video that will undoubtedly reveal crucial information about the “sharp-dressed man” who escorted a disheveled Mutallab to the boarding area. Haskell described the suspected terrorist as appearing to be a “poor black teenager.”
The well-dressed Indian man did all the talking. He insisted Mutallab be boarded on the plane without a passport and when an airport employee refused to do so Mutallab and the Indian man went to talk with a supervisor. The Indian man tried to pass off Mutallab as a Sudanese refugee and have him boarded despite the fact doing so would be in violation of regulations concerning refugees. In general, documentation must be provided by an embassy in order for refugees to board international flights.
Mr. Haskell did not see Mutallab again until the botched terror bombing inside the plane on the approach to Detroit. He did not know how Mutallab finally boarded the aircraft.


The FBI was not pleased with Kurt Haskell when they conducted a follow-up interview earlier today in Michigan. They showed him close-up photographs of various people, including Mutallab. “They kind of tried to trick me,” Haskell explained. The agents tried to pass off two photos of Mutallab as different people. Kurt asked the agents if they were attempting to impeach his story and smear him.
The Indian man was not included in the photographs.
Haskell asked them why he was not shown a full body shot of the suspect. Haskell was eight rows back from the suspect. The FBI agents did not answer and were displeased with the question. He also asked the FBI agents if it would be more appropriate to bring the surveillance video from the Amsterdam airport instead of still photos. “I don’t think they liked that comment from me,” Haskell added. The FBI said they did not have the videotape.

The agents showed Haskell a photograph of the man flagged by the bomb-sniffing dog and taken into custody in customs. “Isn’t this the man who had the bomb in his carry-on bag that you arrested in customs who you refuse to admit exists?” Haskell asked the agents. “They really didn’t like that comment from me and had no comment back to me but I said it sure looks like the man you refuse to admit exists.”
Kurt Haskell was circumspect and careful not to speculate during the interview with Alex Jones. He indicated he is only interested in the facts and does not want to endanger his version of events by speculating on motives.

More Reports
In a full unedited interview with Alex Jones, a nationally syndicated radio talk show host, Mr. Haskell recalled that just before being questioned about the sharp dressed man incident a man was pulled into a room, handcuffed, and detained by authorities. Who was he? Why was he detained? Is there any relevance to the story?
Haskell described the man as being a much younger Indian man. After the incident authorities asked the passengers to move to another location. Obviously it was a big deal. Surely the larger media outlets could find out who this man was and what he was detained for. According to Haskell the authorities then told the passengers that obviously they had a problem. The passengers were then told they could figure out what was going on but nothing more.Something doesn’t smell right and it’s not the underwear bomb.
The reason given for the terrorist attempt was the bombing of Yemen by Saudi’s with help from American CIA. Ron Paul called that one right away before Mutallab said it to authorities. Why didn’t any news agencies cover the bombing of Yemen before yesterday afternoon? It was almost like they had to cover it after the alternative media had already let the cat out of the bag so to speak. That also brings up the question why didn't they cover the man who was detained prior to questioning?

Comment by Moses K Tawose on January 2, 2010 at 3:38pm
The issue has been raised about the person who first got to Umar Farouk Mutallab and if we can be raising some questions it means the story doesn't add up with some missing link.
Also its unfortunate we don't have creditability in the international arena with lots of baggage plus a lame duck government who care less about its citizens. The President has remained silence and with his silence means we did what was alleged.
The parent of the young man would be helped with this information and a good attorney to turn every leave helping him from long term jail in getting to the bottom of all this mess. He shouldn't count on the Nigerian government or its embassy, but his pocket full to repair the damage done to his family and the nation. May God help him..........!!!

Comment by Holawalay Dedon on January 2, 2010 at 2:48pm
well i always knew there is something wrong somewhere... we know Nigeria as a nation is messed up i magically, but then We shouldnt start abusing Mutallab especially if the news is coming from the American News they generally hate Nigeria and green passport as a nation, Thank God for Mr Kurt Haskell a eye withness in the same air plane.. why in the hell did they ignore that India man..when it looks like he is the really the man behind the terrorist attacking ...fuck all the FBI ...the American broadcasting .... for ignoring MR Kurt Haskell..after he kept telling them...anyway ..i know If God want to reveal the real thing he would do...let keep finger crossed for more stories to come..

Comment by Patrick Fejoku Bliss on January 2, 2010 at 9:11am
What exactly is Our Government Doin About This So Conspiracy, even If It Is?This Is The Sorta Thing That Happens When There Is An Irresponsible, Insensitive and Corrupt Govt In Power. Her Citizens Become Targets of Dangerous and callous victims of Manipulation By The West Just To Cover Up Their Inhumane Activities and That Is What The Powerful Watchdog Government Of The West Is About.God's Judgment day will begin and End In The West