Ten month-old Enioluwa Odegbaike who went missing two weeks ago from his parents' home in Magodo, Lagos has been found. According to a member of the Odegbaike family, he was found this morning in the border town of Badagry in Lagos. "Yes he has been found. He is fine and he is in good health," he said.
A female member of the family, who identified herself as Ibukun, confirmed that the baby has been reunited with his family.
"Our dearest baby and now yours, Enioluwanimi just came back home safely at 8.20am this morning," she said.
Baby Enioluwa disappeared with her nanny, Victoria on February 13.
It Is still uncertain if the family paid any ransom and the Police Public Relations Officer, Samuel Jinadu could not be reached to comment on the matter. 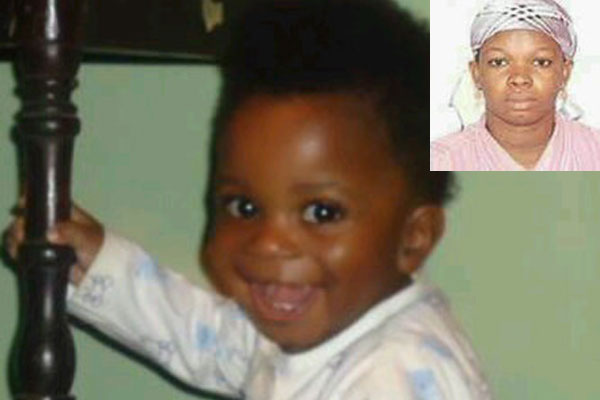 The family of 10-month-old Enioluwa Odegbaike who went missing 11 days ago has called on Nigerians to pray for the return of their baby because other efforts to find the child has proved abortive.

A member of the family who refused to give his name, said in a telephone interview with NEXT that the mother of the baby remains traumatised by the experience.

“She just wants to be left alone. All we need from Nigerians is their prayers that he is found and in good health,” he said.

The child was taken away from his parents’ home in Magodo, Lagos by his nanny on Sunday, February 13 and was never seen again. The nanny is believed to be working with some unknown persons.

When contacted, the Public Relations Officer of the Lagos State Police command, Samuel Jinadu, said the police has arrested the man who acted as the nanny’s referee and introduced her to the Odegbaike’s home. He is reportedly being questioned by the police.

“The person who introduced the nanny to the family has been arrested and is being quizzed by the police. The case has been transferred to the State CID. All efforts are being made to find the missing boy. The case is still under investigation.” He said.

The spate of kidnapping in recent times has led many victims and their families to find various means of finding their loved ones who go missing.

The Internet, through websites, BlackBerry Messenger, Facebook, Twitter and other social platforms have become tools that residents now use to spread news of kidnapping and other crimes in the state.

When five-year-old Sharon Omolayo was kidnapped from her school, Avicenna International School, GRA, Ikeja, Lagos by a trusted employee, on December 13, 2010, the Internet played a major role in spreading the news of her kidnap.

For the seven days she went missing, her pictures and that of her abductor was widely circulated online through several blogs, websites, Facebook and Twitter and within a few days, her name and pictures were imbedded in the minds of almost every Internet user within the country and abroad.

“It was hard not to see her,” said Efemena Mayo, a student. “Her pictures were everywhere. I first got it on my BlackBerry. Then I saw it on Facebook, Twitter, and different blogs. Before I knew it, I was looking closely at every young girl I passed on the street to see if she was Sharon because she had a birth mark on her face that was hard to miss.”

According to David Ogburn, Principal of Avicenna International School, the Internet was a very helpful tool in circulating information about Miss Omolayo, and once the information got on to Facebook, it spread quickly.

Also, when the duo of Ify Eneli and Michael Neri were kidnapped on Friday January 28 while leaving a night club in Victoria Island, Lagos, their pictures and the information about their kidnap spread quickly over the Internet with friends and family members asking for the support of the people in helping to find them.

They were released some days later after their families paid a ransom to their abductors and this information was again circulated over the Internet.

Recently, a picture of missing 10-month old Enioluwa Odegbaike has been circulated over the Internet, ensuring that more and more people get to know about the kidnap and lookout for him.

According to a release by the family, any information concerning the missing child should be reported to the nearest police station.

“If you have any information about Enioluwa or the nanny no matter how trivial, please call 07085534788, or the nearest police station. Enioluwa’s mother (Foluso) can be reached on this number, 08022228422,” said the family member who refused to comment further on the issue.

If you have any information concerning the disappearance of Enioluwa Odegbaike please call the numbers above or send a mail to metro@234next.com or  findenioluwa@systemini.net

There's nothing God can't do... you got to be prayerful.

Comment by Aneke Anulika Marthajoy on February 24, 2011 at 4:37pm
ur child will be found in in good health in Jesus name Amen

Comment by atanselu oluwaseun on February 24, 2011 at 1:47pm
I PRAY THIS ANGEL IS FOUND ALIVE AND THE DEVIL NANNY BE PUNISHED.IJN.AMEN.

Comment by becky on February 24, 2011 at 11:23am
eniola wil be found.in good health God will neva see his children die.

Comment by THE QOHELETH on February 24, 2011 at 8:57am
May the Holy spirit reveal the hands that is holding the child and may no harm come to him. We must be careful on the people we hire as nannies and house helps. Most of them are agents of the devil!

I do believe that the child would be found regardless of the pranks being played with the system and porous security in the country. Ten days is a long time, but the family need to believe in God/

Allah and continue to pray for his recovery. We shall the good news soon.

Comment by what's my name on February 23, 2011 at 5:43pm
INFACT AM SHORT OF WORDS, BUT BY THE SPECIAL GRACE OF GOD THE BABY WILL BE FOUND. THE LORD THAT GAVE DEM THE INNOCENT BOY WILL WORK WONDERS IN JESUS NAME. B4 DS WEEK RUNS OUT, HIS PARENT WILL LOCATE HIM IN GOOD HEALTH IN JESUS NAME. (AMEN)