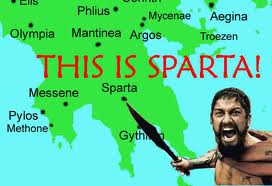 AS greedy and disobedient children were viewed at Sparta with the contempt they deserved, all the boys were trained to obey at a word, whatever the order given, and were allowed only the plainest and scantiest food.
Strange to relate, the Spartans also trained their boys to steal. They praised them when they succeeded in [65] doing so without being found out, and punished them only when caught in the act. The reason for this queer custom was this: the people were often engaged in war, and as they had no baggage wagons following their army, and no special officer to furnish food, they had to depend entirely upon the provisions they could get on their way.
Whenever an army came in sight, the people hid not only their wealth, but also their food; and, had not the Spartan soldiers been trained to steal, they would often have suffered much from hunger when they were at war.
To test the courage of the Spartan boys, their teachers never allowed them to have a light, and often sent them out alone in the middle of the night, on errands which they had to do as best they could.
Then, too, once a year all the boys were brought to the Temple of Diana, where their courage was further tried by a severe flogging; and those who stood this whipping without a tear or moan were duly praised. The little Spartan boys were so eager to be thought brave, that it is said that some let themselves be flogged to death rather than complain.
The bravery of one of these boys was so wonderful that you will find it mentioned in nearly every Greek history you read. This little fellow had stolen a live fox, and hidden it in the bosom of his dress, on his way to school.
The imprisoned fox, hoping to escape, began to gnaw a hole in the boy's chest, and to tear his flesh with his sharp claws; but, in spite of the pain, the lad sat still, and let the fox bite him to death.
[66] It was only when he fell lifeless to the floor that the teachers found the fox, and saw how cruelly he had torn the brave little boy to pieces. Ever since then, when boys stand pain bravely and without wincing, they have been called little Spartans, in memory of this lad.
In order that the boys should be taught to behave well under all circumstances, they were never allowed to speak except when spoken to, and then their answers were expected to be as short and exact as possible.
This style of speaking, where much was said in few words, was so usual in the whole country of Laconia, that it is still known as the laconic style.
To train them in this mode of speech, the elders daily made the boys pass an oral examination, asking them any questions they could think of. The boys had to answer promptly, briefly, and carefully; and if they failed to do so, it was considered a great disgrace.
These daily questionings were meant to sharpen their wits, strengthen their memories, and teach them how to think and decide quickly and correctly.
The Spartan youths were further taught to treat all their elders with the greatest respect; and it must have been a pretty sight to see all these manly fellows respectfully saluting all the old people they met, and even stopping their play to make way for them when they came on the street.
To strengthen their muscles, the boys were also carefully trained in gymnastics. They could handle weapons, throw heavy weights, wrestle, run with great speed, swim, jump, and ride, and were experts in all exercises which tended to make them strong, active, and well.


CONFESSION OF AN IJAW KID

Little Diepriye came into the kitchen where his mother was making dinner.
His birthday was coming up and he thought this was a good time to tell his mother what he wanted.
"Mom, I want a bike for my birthday." Little Priye was a bit of a troublemaker.
He had gotten into trouble at school and at home.
Priye's mother asked him if he thought he deserved to get a bike for his birthday. Little Priye, of course, thought he did.

Priye's mother wanted Priye to reflect on his behavior over the last year.

"Go to your room, Priye, and think about how you have behaved this year.

Then write an email to God and tell him why you deserve a bike for your birthday." Little Priye stomped up the steps to the computer and sat down to type God an email.

Email 1 Dear God, I have been a very good boy this year and I would like a bike for my birthday. I want a red one.
Your friend, Priye

Priye knew that this wasn't true. He had not been a very good boy this year, so he deleted the email and started over.

Email 2 Dear God; This is your friend Priye. I have been a good boy this year and I would like a red bike for my birthday.
Thank you.
Your friend Priye

Priye knew that this wasn't true either. So, he deleted the email and started again.

email 3 Dear God; I have been an "OK "boy this year. I still would really like a bike for my birthday.
Priye

Priye knew he could not send this email to God either. So, Priye wrote a fourth email.

email 4 God, I know I haven't been a good boy this year. I am very sorry. I will be a good boy if you just send me a bike for my birthday.
Please!
Thank you, Priye

Priye knew, even if it was true, this email was not going to get him a bike.

Now, Priye was very upset. He went downstairs and told his mom that he wanted to go to church. Priye's mother thought her plan had worked, as Priye looked very sad.
"Just be home in time for dinner," Priye's mother told him.


Priye walked down the street to the church on the corner.

Little Priye went into the church and up to the altar. He looked around to see if anyone was there. Priye bent down and picked up a statue of the Mary. He slipped the statue under his shirt and ran out of the church, down the street, into the house, and up to his room. He shut the door to his room and sat down . Priye began to write his email to God.

Comment by Didioma Anthony O on September 3, 2010 at 2:31pm
This boy must be a militant hence prieye! It flows in their blood.

Father of Dowen college student, Sylvester Oromoni, gives graphic details of how his son was tortured by the alleged bullies and the trauma Sylvester suffered before he died (video)